skip to main | skip to sidebar

Not much happening here; I've been busy working the last months, but if interested, you can see my knitting progress at Ravelry. And, lately I've even crocheted(!) blocks(!), something that didn't happen since I was on the 6th grade I think.. But it's fun and I already proceeded from basic granny squares to more advanced ones, marked having difficulty of two out of three hooks in 200 Crochet Blocks. However, crocheting has not come even close to the pleasure that I get while knitting :D

Other bloggers, fortunately, are more active than me: go and guess how many boxes Olebrumm is going to need while moving, and you'll have a change to have your share of her stash as a reward!
Eingestellt von berlinBat um 17:49 Keine Kommentare:

Continuing the yarn - thinned out back loop method

Not in Finnish today, sorry!

You can find lots of very valuable hints of continuing the yarn and working the ends as you go in the TECHknitting-blog. I started discussing about a method of thinning the back join, but the answer grew and grew and I might include some pictures afterwards so I ended here. Sounds almost like I'm excusing for blogging again (I'm not! :) 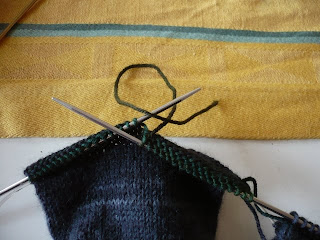 I'm a big fan of the back join to continue yarn, not matter whether the color is changing or not. Mostly the extra bulk does not matter, but sometimes I want to avoid any bulk at all. Like: I happened to be in the middle of the front of a sweater I knitted for G a while a go as the yarn just, well, ended there, with no warning! OK, so I was not paying attention, and I would have preferred to continue the yarn on the side of the sweater, but didn't want to rip half a row either... call me lazy. It worked pretty well.

You can "thin out" the back join or the overlap join to avoid bulk by splicing a multi-plied yarn, 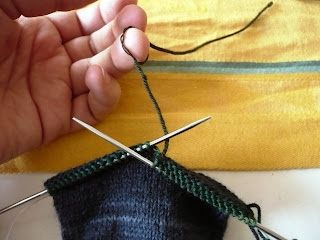 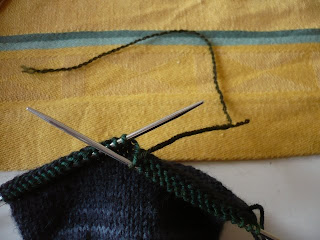 Then make a (say) back join with the remaining 3-4 inches of half-the-yarn. 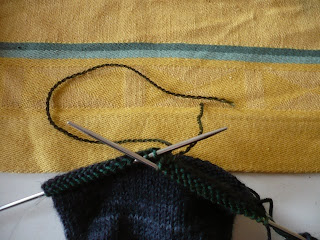 Allow little overlap between the cut (short) end and the long end, depending whether you want to sew in the ends afterwards. 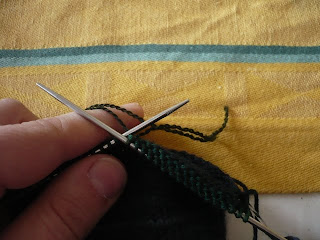 Knit a couple of stitches, depending on the size of your loop, to make joining the new end easier. 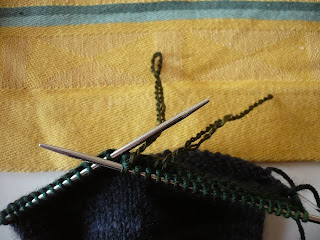 Do the same with the new yarn end, cutting half of the plies (in this case 1 of 3 in a 3-ply yarn) 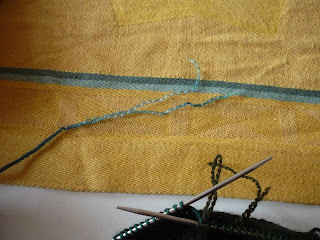 and making a loop of the remaining ones. 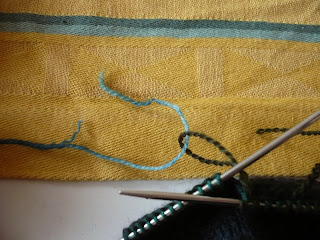 You will have no bulk whatsoever in your join, but the yarn will always have the original thickness. 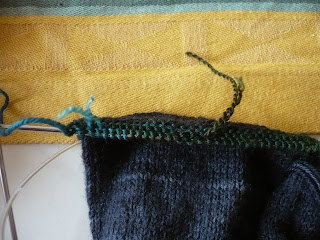 The problem with this method is that there is a change of getting wisps of the remaining threads sticking out of the fabric, also in the right side. 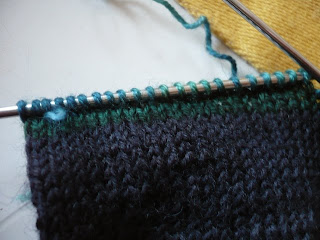 I'm discussing two cases of avoiding these wisps, unfortunately both of them are imperfect:


*If I'm lazy and the back side is not going to show, I separate the short and long end for an extra inch, do not overlap the ends but only make the loop on the long end (back join) allowing also the long end some 1 inch extra at the point in which the short and long end are separated. Now I have 1 inch (or as long as you wish) of both long and short ends coming of the fabric at the same spot. After the blocking I can handle them like I would for a normal back join except that the threads of the yarn are separated. Usually I just cut the ends leaving some 1/4-1/2 inch extra on the back side (like the inside of a sock).

*If the back side is going to show,
1) I separate the long and short ends for at least ca 1 inch.
2) I make a loop of the long end and overlap the long end with the "whole" yarn at the point where the short and long end are separated, leaving at least 1 inch extra for the short end to be weaved in later, as well as 1 inch of the long end beyond the overlapped part.
3) If possible, I spit-felt the long end together with the "whole" yarn for the first sts that I'm using to knit i.e., the point where the back join starts (however adding bulk again, but not as much as in a normal back join).
4) As previously, I leave the ends to be cut after blocking. However, this leaves you with the doubled amount of ends, since the short and long ends are not coming out of the fabric at the same spot. That, is in my book, means a doubled probability of wisps.. so it might be necessary weave the spliced ends, or maybe use the overcast-method.

Now this is G's sweater, showing two wisps where I joined the yarn. 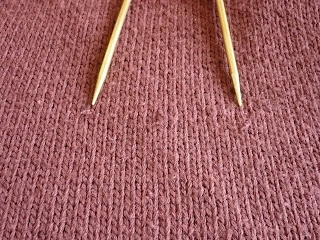 In the case of the G's sweater the yarn, despite of being merino, was not felting but rather cotton-y, so I left pretty long ends hanging in the join (maybe 3 inches each) and after "back join with 1 sts overlap of the whole yarn and the long end" did something similar to the overcast-method to weave in the thinned-out ends as I went (for a couple of stitches per end and row), and also weaved in the remaining ends after blocking.

The wisps were not visible first, but after some weeks use they popped up in the front. Since the inside of the sweater is not showing I just thucked them in 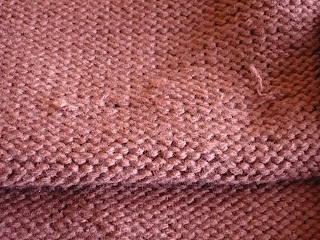 - problem solved! I the picture of the purl side you can slightly see that some ends have been woven in, but this does not show in the knit side. 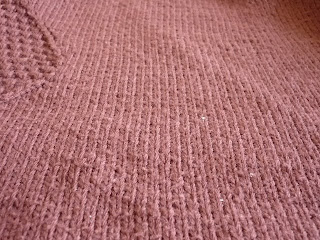 I don't think the ends are going to pop up in the front again, but even if, I'm just going to keep thucking them in, I think.
Eingestellt von berlinBat um 10:24 3 Kommentare:

Happy this year! I'm starting blogging again, with a meme. Next time with holiday knitting?

I stole this meme from Dr. Girlfriend. The things I have done are in bold.
1. Started my own blog
2. Slept under the stars
3. Played in a band
4. Visited Hawaii
5. Watched a meteor shower
6. Given more than I can afford to charity
7. Been to Disneyland/world
8. Climbed a mountain (who needs number 9 anyway?)
10. Sung a solo
11. Bungee jumped
12. Visited Paris
13. Watched lightening at sea
14. Taught myself art from scratch
15. Adopted a child
16. Had food poisoning
17. Walked to the top of the Statue of Liberty
18. Grown my own vegetables
19. Seen the Mona Lisa in France
20. Slept on an overnight train
21. Had a pillow fight
22. Hitchhiked
23. Taken a sick day when you’re not ill
24. Built a snow fort
25. Held a lamb
26. Gone skinny dipping
27. Run a Marathon
28. Ridden in a gondola in Venice
29. Seen a total eclipse
30. Watched a sunrise or sunset
31. Hit a home run
32. Been on a cruise
33. Seen Niagara Falls in person
34. Visited the birthplace of my ancestors
35. Seen an Amish community
36. Taught myself a new language
37. Had enough money to be truly satisfied
38. Seen the Leaning Tower of Pisa in person
39. Gone rock climbing (indoor)
40. Seen Michelangelo’s David
41. Sung karaoke
42. Seen Old Faithful geyser erupt
43. Bought a stranger a meal at a restaurant
44. Visited Africa
45. Walked on a beach by moonlight
46. Been transported in an ambulance
47. Had my portrait painted
48. Gone deep sea fishing
49. Seen the Sistine Chapel in person
50. Been to the top of the Eiffel Tower in Paris
51. Gone scuba diving or snorkeling
52. Kissed in the rain
53. Played in the mud
54. Gone to a drive-in theater
55. Been in a movie
56. Visited the Great Wall of China
57. Started a business
58. Taken a martial arts class
59. Visited Russia
60. Served at a soup kitchen
61. Sold Girl Scout Cookies
62. Gone whale watching (not really but seen some free porpoises)
63. Got flowers for no reason
64. Donated blood, platelets or plasma
65. Gone sky diving
66. Visited a Nazi Concentration Camp
67. Bounced a check
68. Flown in a helicopter
69. Saved a favorite childhood toy
70. Visited the Lincoln Memorial
71. Eaten Caviar (not from a sturgeon though)
72. Pieced a quilt
73. Stood in Times Square
74. Toured the Everglades
75. Been fired from a job
76. Seen the Changing of the Guards in London
77. Broken a bone
78. Been on a speeding motorcycle
79. Seen the Grand Canyon in person
80. Published a book
81. Visited the Vatican
82. Bought a brand new car
83. Walked in Jerusalem
84. Had my picture in the newspaper
85. Read the entire Bible
86. Visited the White House
87. Killed and prepared an animal for eating (a fish)
88. Had chickenpox
89. Saved someone’s life
90. Sat on a jury
91. Met someone famous
92. Joined a book club
93. Lost a loved one
94. Had a baby
95. Seen the Alamo in person
96. Swam in the Great Salt Lake
97. Been involved in a law suit
98. Owned a cell phone
99. Been stung by a bee
100. Rode an elephant
Eingestellt von berlinBat um 19:01 1 Kommentar:

ETA 1: vähän kun etsin niin löysin:
After looking around for a while I found it myself:
MosaicMaker

So I've been knitting, and to prove this I would also add a mosaic picture
... if someone gives me a hand about how to export/print/link a flickr-set-mosaic here. I just don't get it. 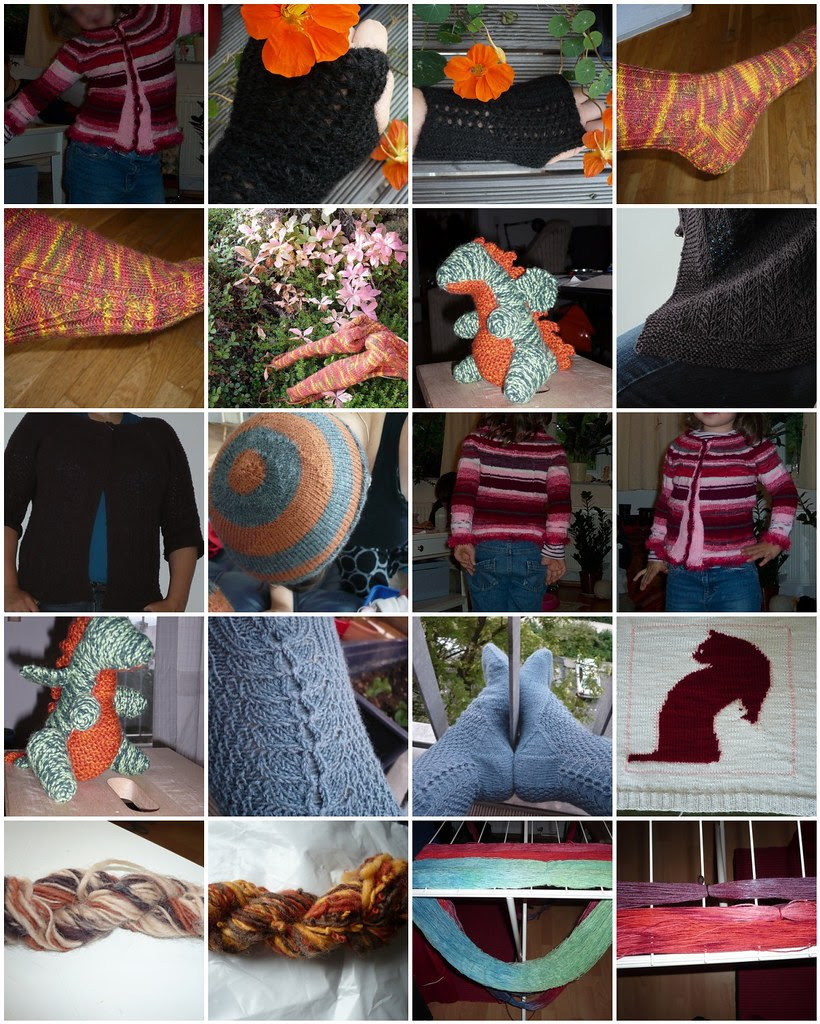 Spinning with CDs relates to a tutorial which I tried. It was fun! I also found out that a friend of mine has an unused spinning wheel staying around, so I might be lucky enough to test it soon. Yay!

I first wrote inertia and not intarsia. You might want to try and guess what I've studied... 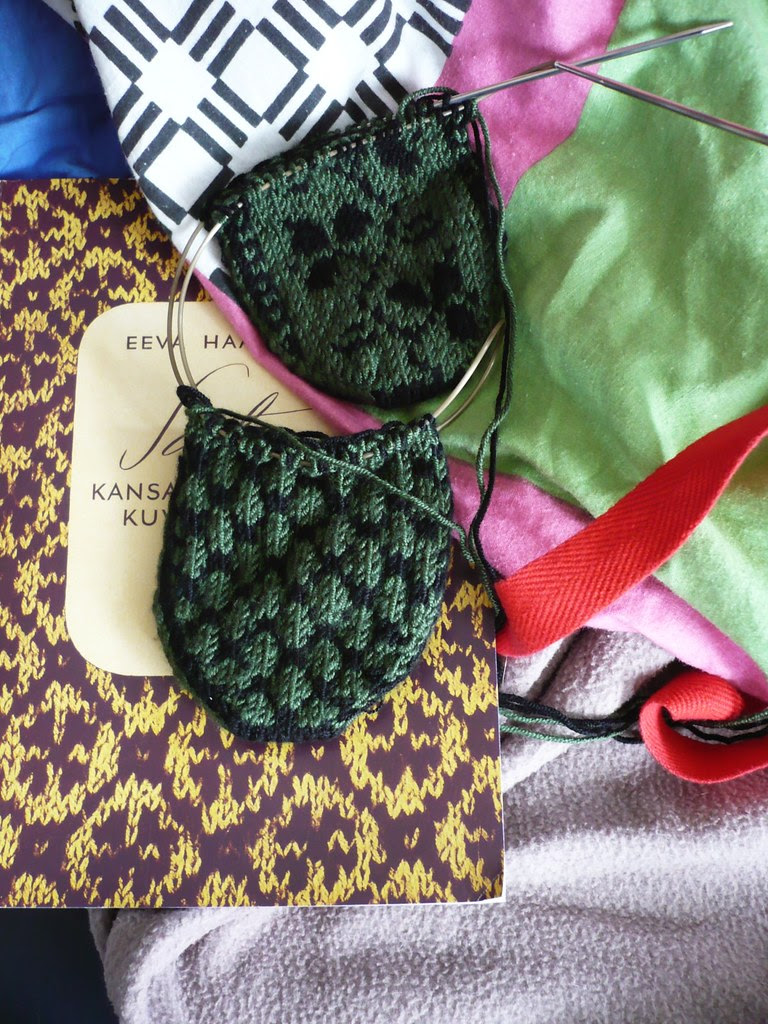 Well we're not quite going backwards although the speed of updating isn't very fast... In the last couple of months I've been mainly doing socks - a pair of them including very kind help from Tess  to get my copy of the book by Haavisto called "Sata kansanomaista kuviokudinmallia"  - one hundred traditional (finnish)  fair isle patterns. These socks had been queuing for almost a year (and there were also two pre-versions of them) now but finally tonight I'll know whether they fit. 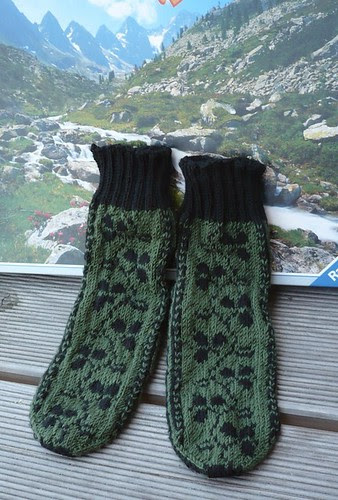 The puzzle on the background has something to do with the socks: I started the first version of the socks with that amazing view, but they're hibernating since -  there were some trouble with the first heel.. 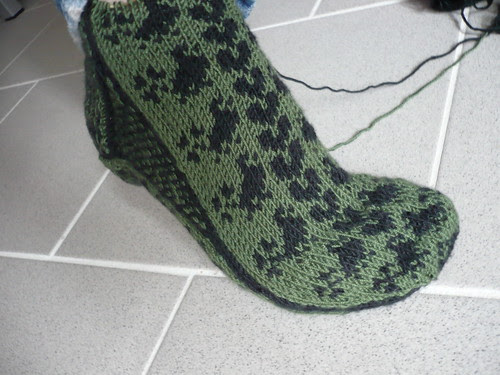 The beta version of the socks was done with the "birdy"-pattern from Ulla, but they're too large for the receipient. G didn't mind at all when I asked whether she'd like to have them :) Both pairs of socks are made of Schachenmayr's Micro-yarn (about 70-75 g a pair), with 2.5 mm circular needle. 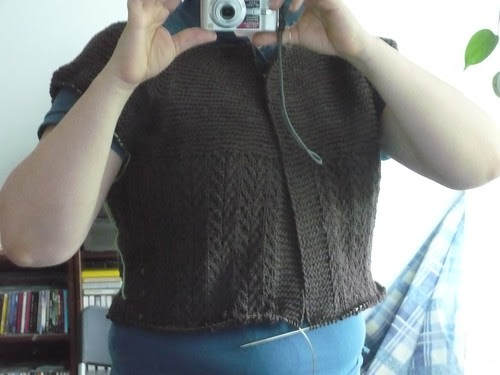 About the title: last week I read about Tui's new project and had to start my own right away! The yarn had been waiting for the perfect pattern for a year anyway. Elizabeth Zimmermann's February sweater in Lady size [ravelry]. I've never knit this frantically, I'm now done with the body and started the sleaves this morning.

Magknits is gone :( Laminaria is ready :) 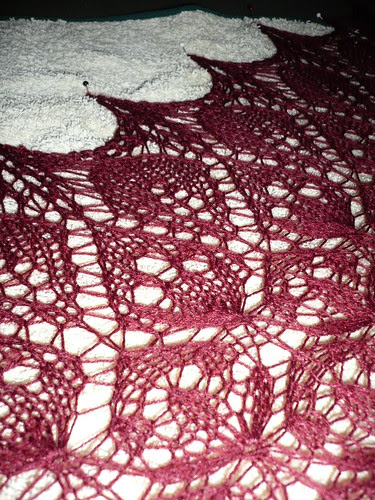 I've also been knitting, Laminaria is blocking (so picture will follow in the evening) and I started something secretive for my sister. 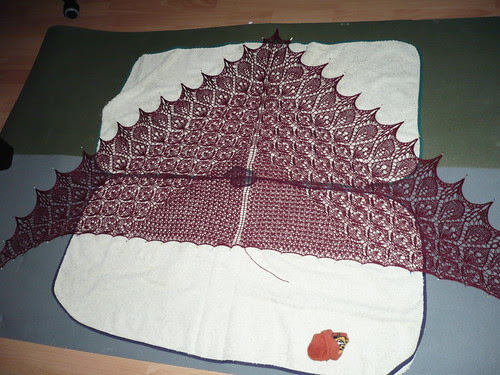 alive. And knitting. Here some xmas presents, as I've almost forgotten them: 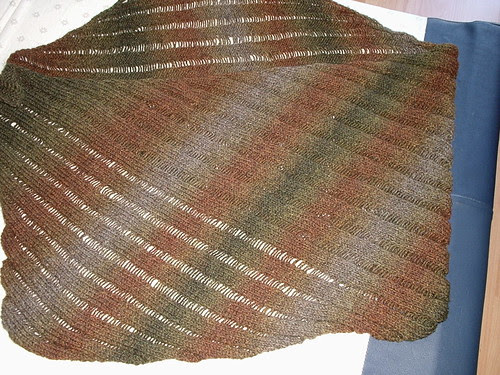 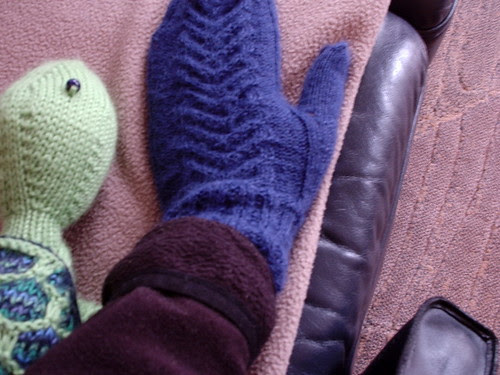 ja kilppari niiden kyydittäjäksi / and a sheldon to accompany them 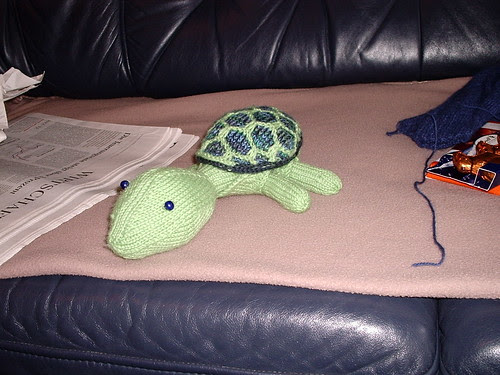 Socks for my mother, mixing sidewinders with Snickets. I screwed approx. everything up that's possible to still keep the socks wearable... 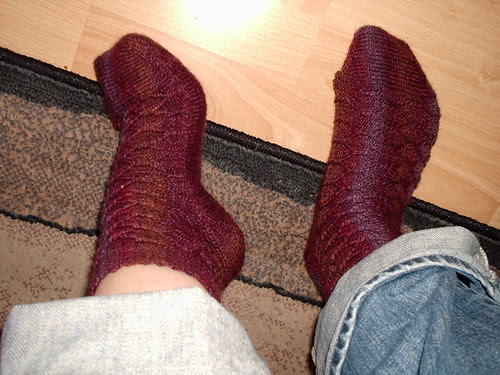 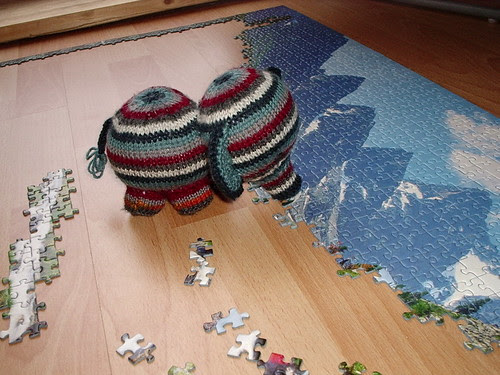 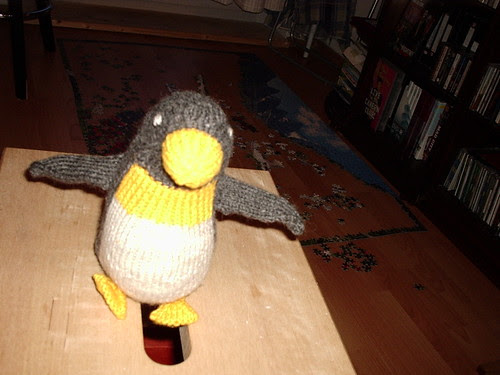 Tupakkahanskat ystävälle, säädetty New Foundland Mitts-eistä. Pinnasta tuli ihanan elävä!/ Mitts for a friend who smokes, based on New Foundland Mitts. The surface is so lovely living, I'm planning to make another pair in the future! 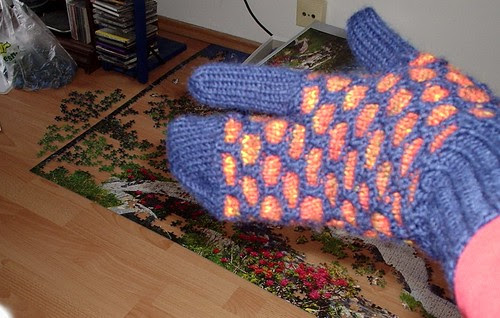 I also gave hats for my brother and dad, which I already presented.
Eingestellt von berlinBat um 12:51 3 Kommentare: